This post is about cheese, the portuguese kind that if you don’t already know about, you should search for on the internet and order some right away. Besides me talking you into trying some of our greatest delicacies, there will be a recipe, with simple ingredients none the less. Even if your cheese purveyor is not a portuguese fan (which he/she should be), you can adapt and create as you wish, with any other similar cheese you can get your hands on.

So, Azeitão cheese has a lovely story behind it, like most interesting cheeses do. One day, this guy (Gaspar Henriques de Paiva) who used to live in Serra da Estrela (highest range of mountains in continental Portugal, which produces a creamy scoopadilic cheese) decided to live elsewhere. He therefore moved to somewhere, called Azeitão, and decided to mimic his beloved iguary. So, that’s how the Azeitão cheese was borne (I am now wishing for more synonyms for the word cheese – which is impossible – so bare with me). It is made from unpasteurized sheep milk, and is coagulated with cardoon (Cynara cardunculus, L – related to thistle and artichoke), an abundantly found herb around the area, which has an enzyme that is responsible for the coagulation of the milk (that only works with goat or sheep’s milk). Later on cured in special conditions for 20 days, so that delicious flavor can maturate, consistency set and rind be developed. This precise way of production, also the breed of the sheep and the geographical location (Serra da Arrábida – District of Setúbal), makes this cheese a DOP product (Protected of Designation of Origin), with a runny spreadable consistency known by every portuguese person on the planet. Marvelous. 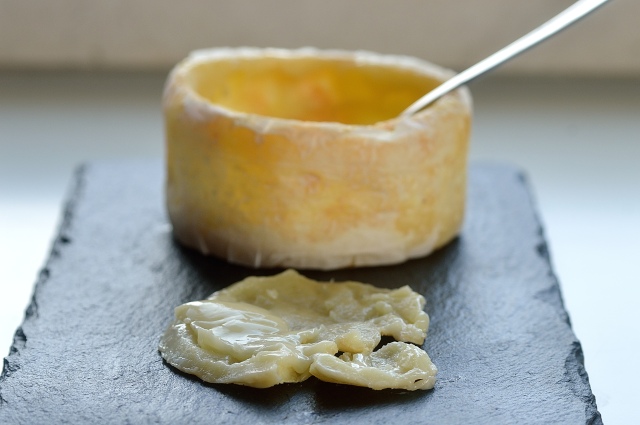 I will warn you now – I eat too much bread. That’s just how the portuguese roll. Bread with everything. I don’t really have a tendency of eating it with a main course (although most PT’s do), unless it is a picky, or there is plenty of dipping sauce, or the bread itself is the meal – with picky snacks. Now, another warning, we don’t appreciate you calling our eating habits tapas, if you ever say that in front of a portuguese, you will get the hatred stare.  We eat and adore petiscos. In every possible way. And that always includes bread. So don’t think I’m obsessed with it or anything, it’s just a part of who I grew up to be. It is obviously a part of this vittle.

So, here is the “recipe” – it is more an idea than a recipe:

First get an Azeitão cheese. Spread that amazing gooeyness on anything you like. But, don’t do it while at fridge temperature – you must let it set at room temperature for a while before it becomes spreadable. Now, to all you health safety freaks out there, this can be a microbiological hazard, as it does have unpasteurized sheep’s milk. So don’t do this too often, as huge temperature discrepancies will increase the risk of a possible upset tummy. Although many studies have shown that raw milk cheese is a safer option, because of the natural flora (which interferes with pathogen survival), you should always store your goods in proper conditions and avoid huge temperature differences.

When you get to that point where you look at your cheese and think “not enough to spread on many crackers, but still plenty not to waste”, then that is when you should think about using that last bit and stuff the rind.

Now, choose your filling. I decided on mushrooms, parsley, fennel and smoked trout. The idea of fish with cheese never amused me much, but this is smoked trout from a can, which goes well with the mushrooms and combines perfectly with the delicate yet strong Azeitão. 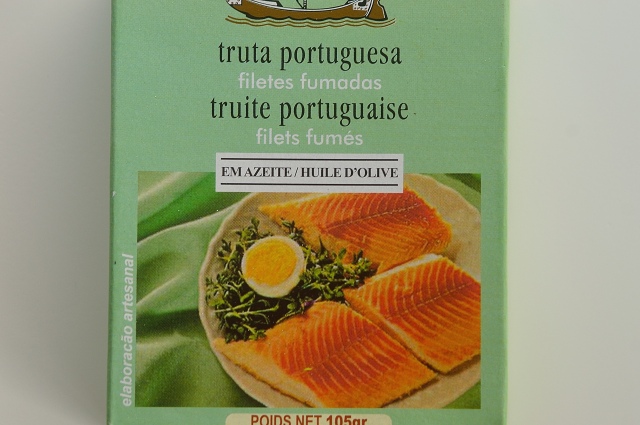 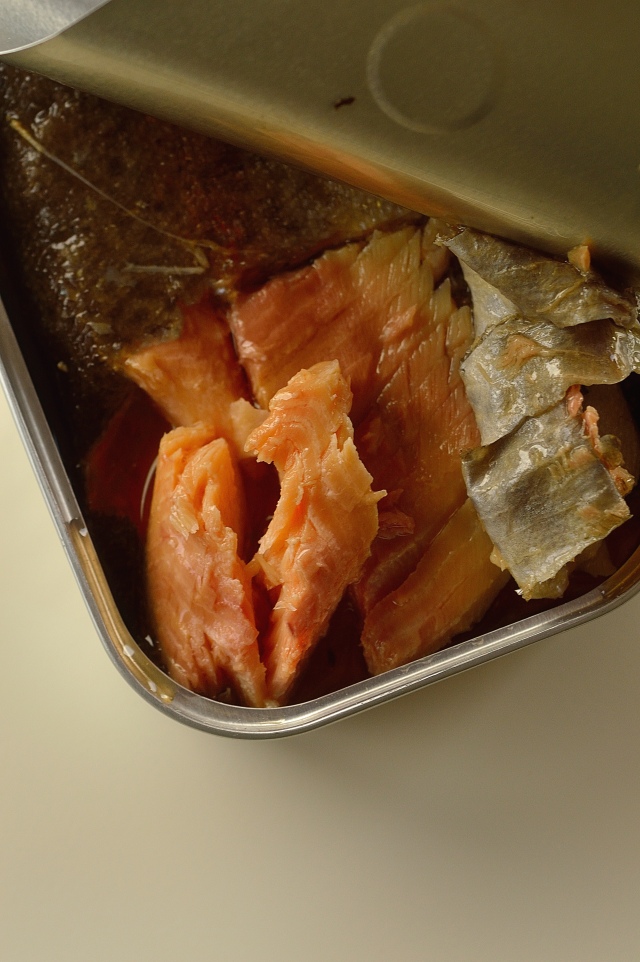 The mushrooms should be sautéed beforehand, otherwise they will release too much moisture and ruin the cheese. A slight maillard reaction also gives flavor and lets the rest of the ingredients to caramelize a bit. So, add a bit of olive oil to a pan, fry a bay leaf (yes, fry it a bit – it’s just like those indian spices which render best when heated in grease) crush a few cloves of garlic, add mushrooms and let them release all the water, then add chopped up fennel. Refresh with some dry sherry, and finish off with chopped parsley. 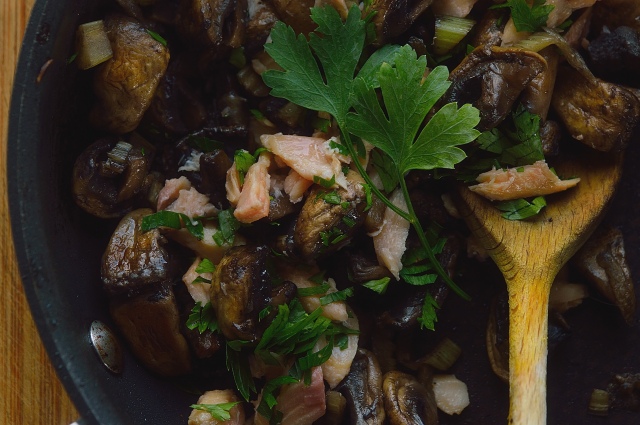 For the trout – this is already cooked, so just add it in with the mushrooms when finished.

Best to scrape all the remaining cheese out of the rind, before filling. Save that last bundle of happiness to scrape on one last cracker, and put the rest aside to top off the filling, so it gently melts in the oven. And top with whatever you have left of the cover (mine broke a bit, but it worked just as well). 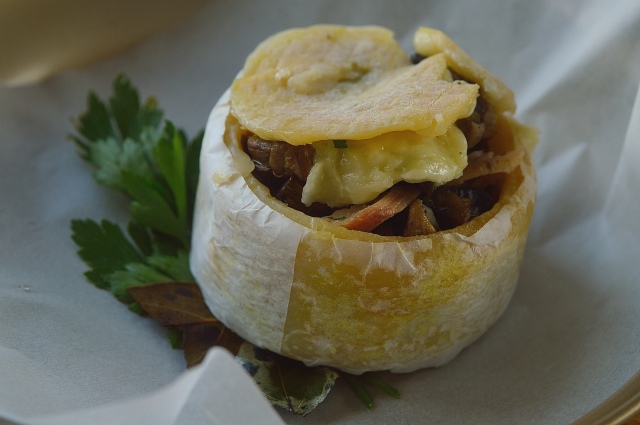 I advise you to bake it on top of some parchment paper, as to move it will be a non profitable challenge – just cut around the excess paper and move it to a plate to serve (with the help of the parchment paper), so it won’t be destroyed.

The remaining bay leafe and parsley was used to decorate the concoction.

To bake it – 180ºC oven for about 5 minutes, it should end up looking like this: 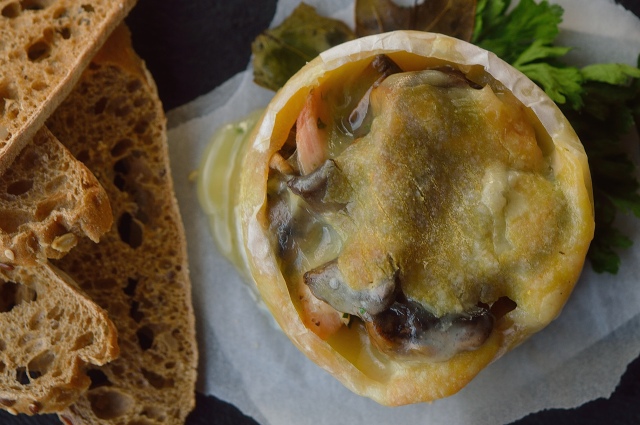 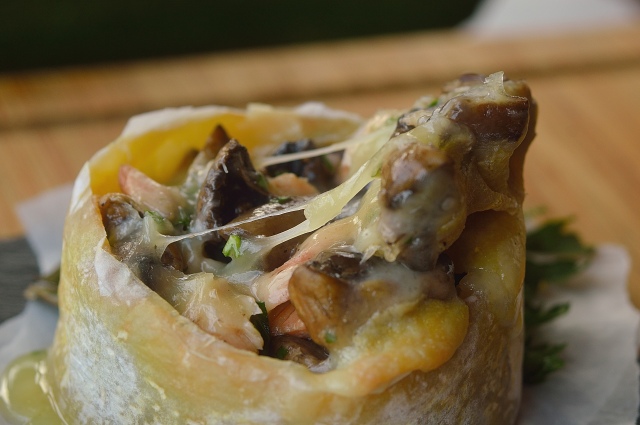 Serve it right away, with thinly sliced bread of your choice. Surrender to the meltiness of the cheese!

I used whole wheat with plenty of healthy seeds, just to make it a little bit healthier (though all the mushrooms, parsley, fennel and garlic already provide so many vitamins, not to mention the trout which is rich in Omega 3 – mega healthy treat).