Either you love bacon, or you are wrong.

This post is about a bacony place, called Fifi’s Lunch Box, in Terre Haute Indiana. I hadn’t set foot in the United States since 2002, when I was only an eleven year old girl. So, when my trip was booked after a decade, one of the items on my bucket list was to find a bacon themed place to eat. But it seemed that my list was way too long, I had too much to do with so little time to spare. Finally, on my last day, I begged my nan to drive me to this place my aunt had told me about, that had everything with bacon, even bacon soda!

Off we went, through Terre Haute’s chaotic Lafayette Ave., got lost a couple of times, nearly got hit (at least once), even stopped by the police (no ticket thank goodness – people in Indiana seem to be very kind and unusualy nice, police likewise, even if you turn on a red when you’re not suppose to).

We were about to give up, when my baconstinct said “No Megan, you are too close to just go back home now – what if you only come back after another twelve years?!” and asked around at a gas station. Obviously, everybody knew about Fifi’s, this was a good sign, and back on track we went, to find The Bacon Utopia.

There it was, shut. I panicked, but knocked, and Jaqueline was there so kindly to open the door and question my curiosity. I think I might of gotten of as some type of lunatic, Nikon around my neck, wanting to take pictures of everything, and asking “where are the Bacon Cupcakes?”. I suppose americans are used to this, so in I went, and got talking to Jaqueline, who was just getting prepared for an event of 300 people the next day (so.much.bacon.arrghh). Their food truck was off elsewhere catering to other customer’s bacon needs in some nearby event. I questioned about their products, complimented on the bacon donut burguer (yes, they do it!) and got lost in all the bacon merchandise stacked up neatly on the shelves.

I had to say that I was desperate into trying something, as I was from Portugal, where nowhere you can find much bacon enthused people nor places (alghtough I think if anybody would open up that type of business oversees, it would be me), and was eager to write about the shop on the blog. In the end, I took three cupcakes home and a box of bacon candy. Tempted into also buying a bacon lipbalm, and a pound of their homemade bacon (but highly doubted that customs would let me go through with that in my suitcase) I curbed my enthusiasm by sticking to my main plan – to take a few pictures of the yummy bacon sweet goodies, because bacon goes good with everything. Jaqueline was so kind into offering a sample of gooey bacon butter cake, which really tasted like bacon. It was delicious. 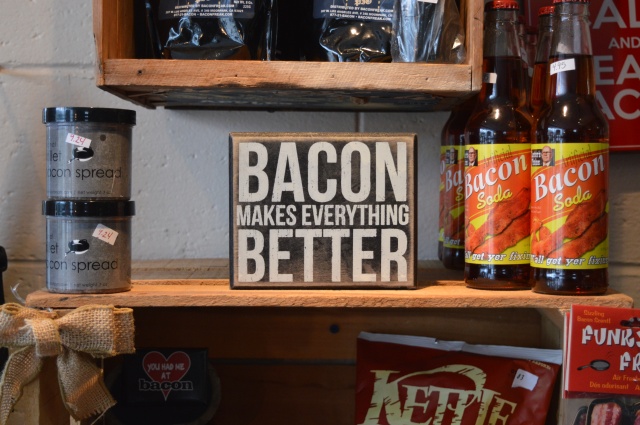 My next mission was to get home with three intact cupcakes, so I could try each one of them, take notes, shoot some mouthwatering pictures and show the rest of my bacon crazed family (who lives in Terre Haute) that bacon sweet tooth works very well.

Jaqueline informed me that they are about to open a new shop, in a new location. North Terre Haute ends up being a bit out of reach, and it is a small place to cater to their upcoming fans. I hope I can check it out next time I go back, and actually enjoy having a meal there.

So what you should know about Fifi’s is:

– They make their own bacon, applewood smoked, also have a great pork purveyor who caters to big orders, with top notch quality suine;

– The menu is amazing;

– It is a humble enviorment with a friendly vibe;

– “Bacon makes everything better” and “Keep Calm and Eat Bacon” are signs posted on the wall; 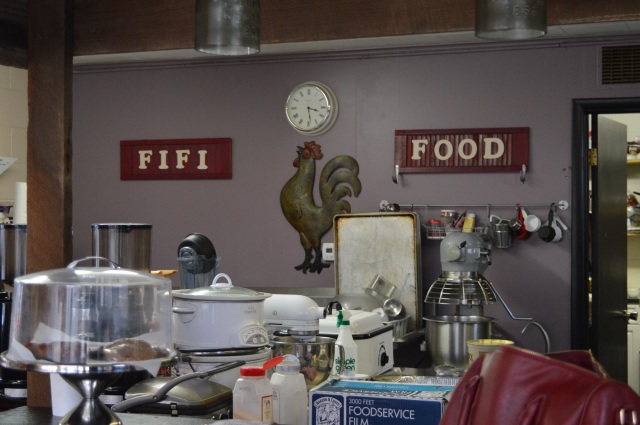 I hope you guys become international and think about visiting Portugal in the near future, I would definitely become a regular customer, and drag all my bacon friends there.

About the cupcakes I tried:

Beer batter dough, cheddar cheese and bacon buttercream frosting: wow! Loved the frosting and the density of the cupcake, which was more like a muffin.

The Elvis Presley, banana bread base, peanut butter frosting, chocolate chips and a bacon piece on top: anything peanut butter, thumbs up, with bacon? Even better.

Dark chocolate and buttercream frosting with a cute decorative salty piece of bacon on top: lovely fluffy texture, great color contast between the black, white and the rosie piece of bacon. 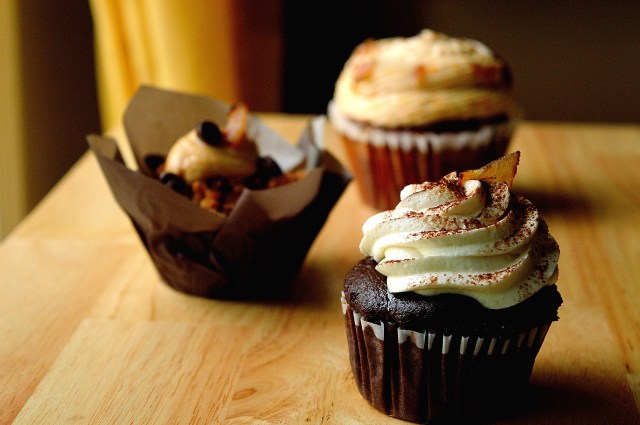 Beyond recognition, all cupcakes were a success. My favorite was the Elvis Presley, the peanut butter goes so well with the banana and the bacon gives it that extra flavor experience, as salty savory just becomes the “cherry” on top of the “cupcake”. 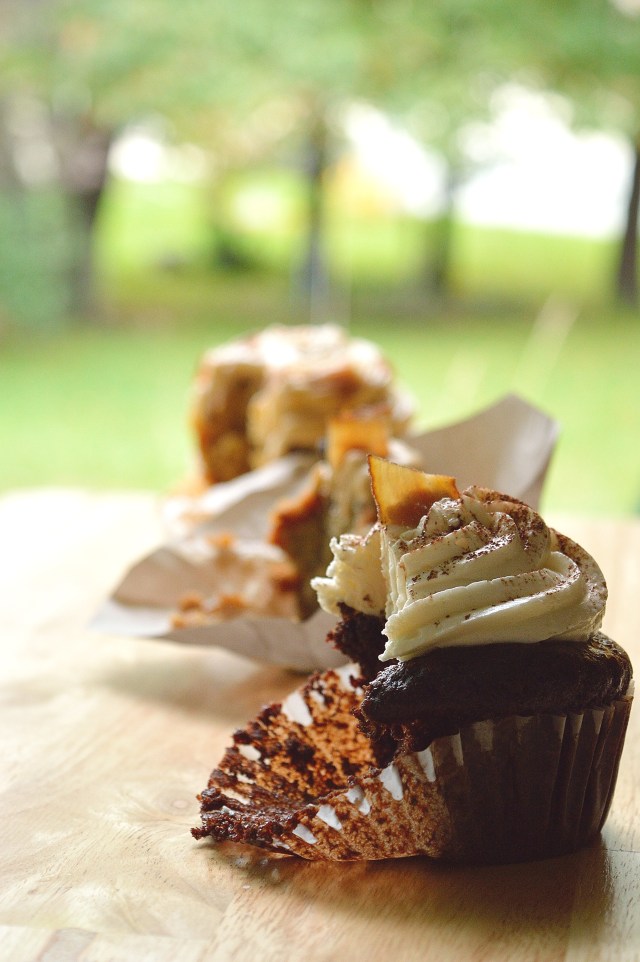 Before I go, I have to tell you about this awesome bacon magazine I found in Rural King (the only place in the states where you can take your pet – even a snake, as long as it has a leash on it. Oh! And free popcorn!). Only in ‘murrikuh! Everything bacon related is in it, from how to make it on the comfort of your own home, amazing recipes and plenty of delicious bacon photos.

Don’t forget to check out Fifi’s website, facebook page and if ever in the vicinities of Terre Haute, or thinking about going to a nearby festival, check out if you are close to tasting a bit of bacon heaven. With homemade bacon, what else?

Thank you Fifi, for making my overdue trip to the states worth while, and putting up with my everlasting curiosity about meeting your shop. I approve this vittle, as a luso-american foodie! Keep up the good work!

One of the best combinations ever, simple comfort goodness of mouthwatering food. The key to this yummy dish is quality ingredients (as always), so make sure to buy the best bacon, and don’t forget some outstanding mushrooms.

This is no low cal dish, however, healthy substitutes are always a possibility, like whole wheat pasta or light cooking cream (turkey bacon is NOT an option, please cook the real deal). 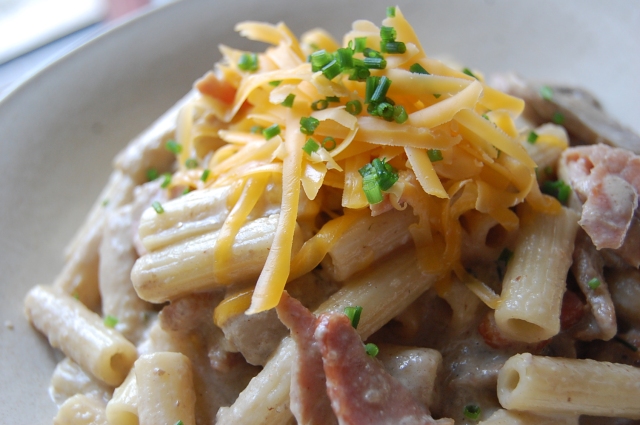 First of all, and most crucial step, is the sauce. No simple matter of engaging cream with sautéed mushrooms, it’s all about blending the ingredients together, none the less, a simple technique that makes all the difference. Just blend the mix and, well, that’s it. Nothing like enhancing flavors by grinding and destroying food’s cells.

First step: fry the bacon. Now this will get you going! Nothing fancy about this process, just pure maillard baconny smell.

Second step: Take the bacon out of the pan, cut it into pieces (not microscopic), oh and try not to eat it all while you complete the following steps. Or just make some extra, in case you can’t help yourself from nibbling.

Third step: Add some olive oil (if previously cooked bacon is not too fatty), chopped onion, let fry. Slivered fresh garlic and a bay leaf. Fry some more. Add mushrooms, fry for 5 minutes and deglaze with white wine (I use dry Sherry).

Fourth step: Separate half of the mushroom mix.

Fifth step: Add cream to the mixture left in the pan. Lactose intolerants, don’t panic! Soy cream is and excellent substitute, I find it quite enjoyable to cook with. Allow the sauce to heat through, never boil.

Sixth step: Blend what is in the pan, but don’t forget to take the bay leaf out first!

Seventh step: Stir in butter (yes, butter, not that I can’t believe it’s not crap, nor margarine), the remaining mushrooms, salt (if needed) and freshly ground pepper. Take off the burner, add some delightful cheese (my fave is cheddar, roquefort or parmegiano) and more cream until desired consistency. Mix everything with the pasta.